Mosaics, of important art historical significance (and worth millions of pounds), have recently been restored and re-instated in a Redditch shopping centre. The mosaics were originally commissioned in the 1980s and designed by one of the pioneers of pop art, Sir Eduardo Paolozzi. The mosaics are characteristic of Paolozzi’s signature style, revealing his affinity for collage, vibrant colour, rhythmic lines and abstracted forms, whilst paying tribute to Redditch’s history as a centre for needlework. The 12 panels are huge, each measuring 21 x 10 feet, and are some of the most significant public art in the Midlands.

Who was Eduardo Paolozzi?

Born to Italian immigrant parents, Sir Eduardo Luigi Paolozzi (1924 – 2005) studied at Edinburgh College of Art, St. Martin’s School of Art and the Slade School of Art. Following his studies, Paolozzi lived in Paris from 1947 to 1949 where he experienced the work of the Surrealists and Dadaists, and met contemporary artists such as Alberto Giacometti and Jean Dubuffet. He also befriended other young Scottish artists in the city, including William Gear, William Turnbull and Alan Davie.

Paolozzi forms the Independent Group in the 1950s

Returning to the UK, Paolozzi was one of the key and founding members of the Independent Group. The group consisted of artists, architects, writers and critics who wanted to challenge prevailing modernist approaches to culture, and they met at the Institute of Contemporary Arts (ICA) in London. From the very first lecture, Paolozzi introduced mass culture, such as colourful images from magazines, into debates about high culture. During this time, he experimented with prints and collages, illustrating the unexpected connections and affinities between science, technology, art and popular culture. These works suggested a radically new aesthetic that, before the end of the decade, was to form the basis of pop art (and which can be seen in the mosaics).

Alongside the pop art aesthetic, Paolozzi was amongst a group of artists developing a new aesthetic to counter the classicism of Henry Moore and Barbara Hepworth. Paolozzi’s prints featured the human form fragmented, made from machine parts suggestive of automation. His sculpture was similar: roughly cast, bronze heads and figures were encrusted with the impressions of nuts, bolts, and other junk. This brutal imagery spoke of the uncertain human future of mankind, and the critic Herbert Read described it with the term ‘Geometry of Fear’. There is an element of this aesthetic in the disjointed human heads and machinery depicted in the mosaics.

During the later stages of his career Paolozzi was commissioned for many public sculptures, including the Redditch mosaics, closely followed by another mosaic scheme for Tottenham Court Road Tube Station, for London Underground in 1981-2. Public sculpture commissions also include a bronze figure of Newton (1995) for the main entrance of the British Library, and a colossal bronze sculpture, Faraday (2000) which stands on the campus at the University of Birmingham.

The Paolozzi Mosaics in Redditch

Funding for the mosaics was made available from the Redditch Development Corporation, the Needles Industry Group, and the Arts Council of Great Britain. A brief was prepared, stipulating “a feature/artwork related to the most significant industry base within Redditch, namely, needles”. Paolozzi was given the freedom to interpret the brief in his own terms.

The artist declared that the needle industry theme would run through all 12 panels in the form of:

“a multi-evocative metaphor, floating in some cases against woven material, symbolizing the uses and results of the needle in its widest sense – a vital tool for the uniting of many substances in both a global and metaphysical sense”.

He considered the shape and the pattern of needle packets, as well as the machinery used in the needle industry. He also included natural imagery such as butterflies and lizards “which might be found in tapestries and fabrics”.

Alongside the needle imagery are many of Paolozzi’s most iconic motifs: the astronaut, the camera, aeroplane, disjointed heads and geometric contours, together with the mechanical and electronic images. These emphasise the contemporary setting and the progression of the town of Redditch, and the overall impression is one of pulsating manufacture, progress, and modern life in technicolour.

Paolozzi produced and selected the images for each of the 12 panels which were drawn individually, hand-coloured, and then put through a Xerox machine to regularise the colours used. They were then cut out and collaged onto sheets to form the individual panels, and the pattern sheets were sent to Spilimbergo, northern Italy; a town with a mosaic-making tradition dating back two centuries. It took three craftsmen, based in Birmingham but originally from Spilimbergo, two weeks to install the work.

One of the aims of the Paolozzi mosaics, according to the artist himself, was to provide “a counterpoint to the living theatre of the shopping centre”. Like his prints and collages, Paolozzi’s mosaics should be enjoyed for their chaotic iconography, colour and patterns combined in unexpected juxtapositions. They are not meant to be read in the same way as an academic history painting but instead demonstrate Paolozzi’s belief that “art can be found anywhere” and show the artist promoting mass and popular culture into ‘high art’.

Paolozzi’s mosaics can be found in Milward Square, at the Kingfisher Shopping Centre in Redditch. They were originally unveiled by Sir William Rees-Mogg (Chairman of the Arts Council of Great Britain) on 19th April 1983.

Fri Nov 17 , 2017
Why I’m digging Digbeth My first experience of Digbeth was one I won’t easily forget. ‘The performance is about to start’, a bearded curator told […] 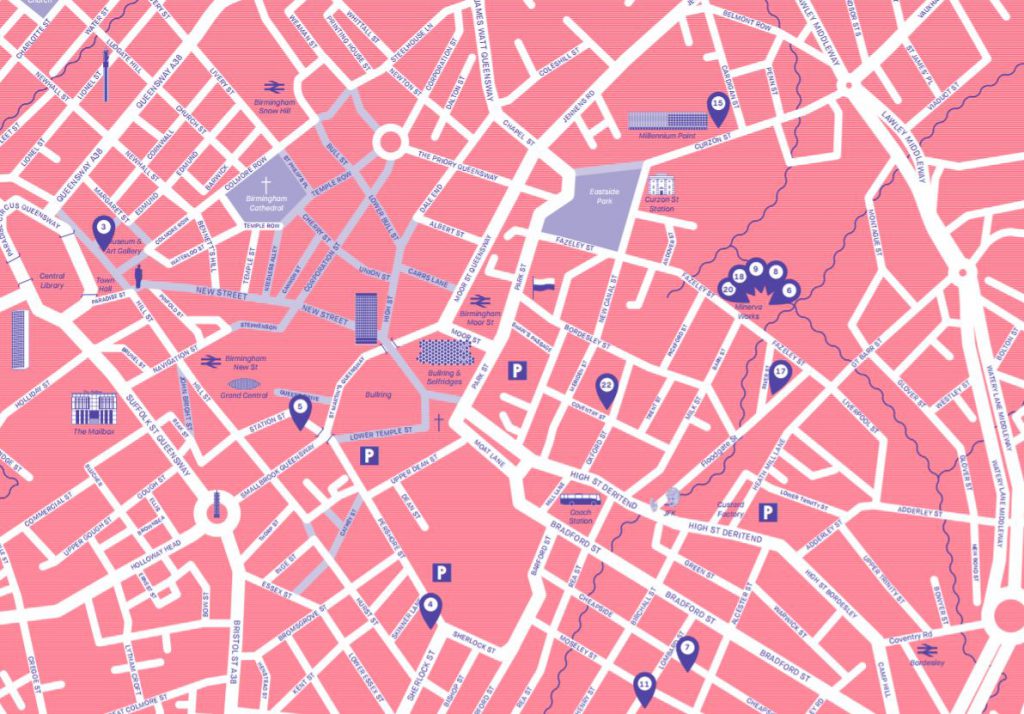