What’s the most important factor when choosing your next city break? Food is always high on my list. Last month I ate my way through Paris. Filets de boeuf au foie gras for lunch is entirely appropriate in France. Just as important as the food is art and culture. But I’ve been, at times, to some museums and galleries which I wish I’d missed. I recall a particularly stuffy coin museum in Cyprus: the air con had broken and the coins all looked pretty much alike. So, if you want to centre your next trip around culture, I’ve put together a list of 12 recommended city breaks for art lovers.

There’s one city for each month of the year (if you’re feeling that adventurous), featuring some of the most famous art in Europe.

Leonardo da Vinci’s ‘The Last Supper’ (c.1495 and 1498) is one of the most famous paintings in the world. Representing the last dinner between Jesus and his disciples, today the fresco is found in its original place, on the wall of the former Dominican convent of Santa Maria delle Grazie in Milan. To protect the painting from deterioration, visitors’ entry has been restricted to a group of 25 people every 15 minutes. So, make sure you book well ahead.

2. Scream at Munch in Oslo

Munch’s ‘The Scream’ (1893) is an icon of modern art. It is an autobiographical and expressionistic artwork based on Munch’s actual experience of a scream piercing through nature while he walked home alone one night. Munch’s painting came to define the modern age, wracked with anxiety and uncertainty.

What you might not know is that there is not just one Scream. Munch created multiple versions. You can find the earliest painted version at the National Gallery of Oslo. I also recommend making a visit to the Munch Museum. The museum owns more than half of Munch’s paintings, and all of his graphic works, showing a more romantic side to his art. This collection includes two other versions of The Scream.

After the art trip, head to Oslo’s harbour for fresh seafood served at one of the many restaurants overlooking the water.

Baden-Baden is a beautiful spa town in Germany’s Black Forest. Old-world luxury alongside art galleries and museums makes it the perfect city break for art lovers. After relaxing in one of the thermal spas (look out for lots of nudity), take a trip to the Frida Kahlo Museum. A shrine to the Surrealist painter from Mexico, it’s appropriately surreal. It houses 100 masterfully hand-painted copies (by anonymous Chinese artists) of the artist’s most famous works, telling the story of her dramatic life and career. It also includes 150 photos by Frida Kahlo, and a large-scale recreation of her studio and bedroom. Faux-Frida, yes. But strangely brilliant also.

Some of the most famous art in Europe can be found in its churches. You can’t miss The Church of Our Lady in Bruges: its 122-metre brick steeple dominates the skyline and its an artwork in its own right. Inside, you’ll find a valuable art collection, including Michelangelo’s renowned sculpture Madonna and Child, created from beautiful Carrara marble. Over the years it’s been stolen (and returned) twice.

Made famous by the dark comedy ‘In Bruges’, don’t forget to climb 366 steps to the top of the medieval bell tower.

Van Gogh began painting sunflowers after he left Holland for the South of France. He painted the first few canvases for his friend, and fellow artist, Paul Gauguin. In contrast to traditional still life paintings of pretty red roses, he wanted to capture wild sunflowers, painting them in bright yellows and reaching their way out of the vase. Today, they are his most famous artworks.

Head to the Van Gogh Museum to see these beauties before enjoying the city’s other distractions. I meant cycling.

Henri Matisse moved to Nice in 1917 and never left. He painted many of his most famous art works in the city, falling in love with the French Riviera. It’s also the city in which he developed his cut-out creations: he began ‘carving into colour’ from brightly painted sheets of paper to create decorative still lifes, figures and abstract compositions. Over time, their scale grew along with Matisse’s ambitions for them, expanding into mural or room-size works.

When in Nice, take afternoon tea in The Negresco. A member of Leading Hotels of the World, it’s just as much art museum as it is hotel. It exhibits over 6,000 items from contemporary art to street art and 17th century masterpieces. Very Versailles.

7. Surround yourself with Water Lilies in Paris

My favourite museum in Paris isn’t The Louvre, which is enjoying record-breaking numbers thanks to Beyoncé and Jay-Z’s recent music video. Instead, its the smaller Musée de l’Orangerie, which houses 8 massive murals by Monet. Inside two galleries, purpose built for the paintings, you’ll find yourself enveloped by the great Nymphéas (Water Lilies) compositions. The paintings are displayed as the artist intended them to be, lit by sunlight in large oval galleries that evoke the shape of the garden ponds at his former Giverny estate. Mesmerising.

Florence is one of my favourite cities, for its incredible art history (and gelato). Here you’ll find some of the finest collections of Renaissance art, including Botticelli’s ‘The Birth of Venus’ (c.1484-1486) at the Uffizi Gallery. It’s a staggering 6 feet by 9 feet, and known as the ‘first large-scale canvas created in Renaissance Florence’. It represents the birth of love, with the goddess Venus arriving on land, on the island of Cyprus. It would have shocked audiences at the time, as Botticelli had chosen to paint a pagan idol. More shocking, though, was that he had painted her nude, introducing a new radicalism to the Renaissance era.

9. Take the bull by its horns in Málaga

There’s more to Málaga than Sangria, sunshine and beach life. It’s the city where Picasso was born, and since 2003 has been home to the Museo Picasso Málaga. The museum’s collection takes you through the artist’s career, from Cubism to abstracted portraits and masks.

Throughout all of his work, Picasso used metaphor and symbolism. One of the motifs which he used over and over again was that of the bull. And his sculpture ‘Tete de Taureau’, or ‘Bull’s Head’ (1942), is certainly one of the most significant artworks of the last century. Picasso made it from the seat and handlebars of a bicycle. So simple, and yet so mysteriously powerful.

When he displayed it at the Salon d’Automne in Paris in 1944 visitors protested and it was removed from the wall. Today, you can see it – on loan from Picasso Museum in Paris – in Malaga.

10. Dream of Magritte in Brussels

The Magritte Museum in Brussels is dedicated to the work of the Belgian surrealist artist, René Magritte. The 250 works on show tell the story of his career from clouds and pipes to bowler hats and green apples. Still today, his dream-like paintings ask viewers to question their perceptions of reality. A few Belgian beers might be the answer.

11. Be dazzled by Op Art in London

Oh London, I couldn’t leave you off the list. Step into Tate Modern to see work by one of the most important Op artists of all time: Bridget Riley. Originally working in an advertising agency, she struggled to make a career from art for many years. It was during the 1960s that she began painting patterns of colours, shapes and lines which seemed to move in an optical illusion. Op Art was cool, and Bridget Riley became Great Britain’s number one art celebrity.

In recent years Artemisia Gentileschi has been rediscovered by art history as a fierce, feminist painter. From the late 16th-century until the mid-1600s, she foregrounded female characters in her artworks, painting them as powerful, self-assured women. This contrasted with her male contemporaries’ imagery of passive, damsels in distress. Her heroines appear composed and focused. See her ‘Judith Slaying Holofernes’ (c. 1614–20) at the Museo di Capodimonte in Naples.

From Naples, you can take a 40-minute train to Pompeii. But not before trying the city’s real heritage: its Neapolitan pizza.

Which other city breaks for art lovers do you recommend?

Fri Apr 19 , 2019
In my recent article I talked about using art and craft to increase well-being and reduce stress. I always see an improvement in my mood […] 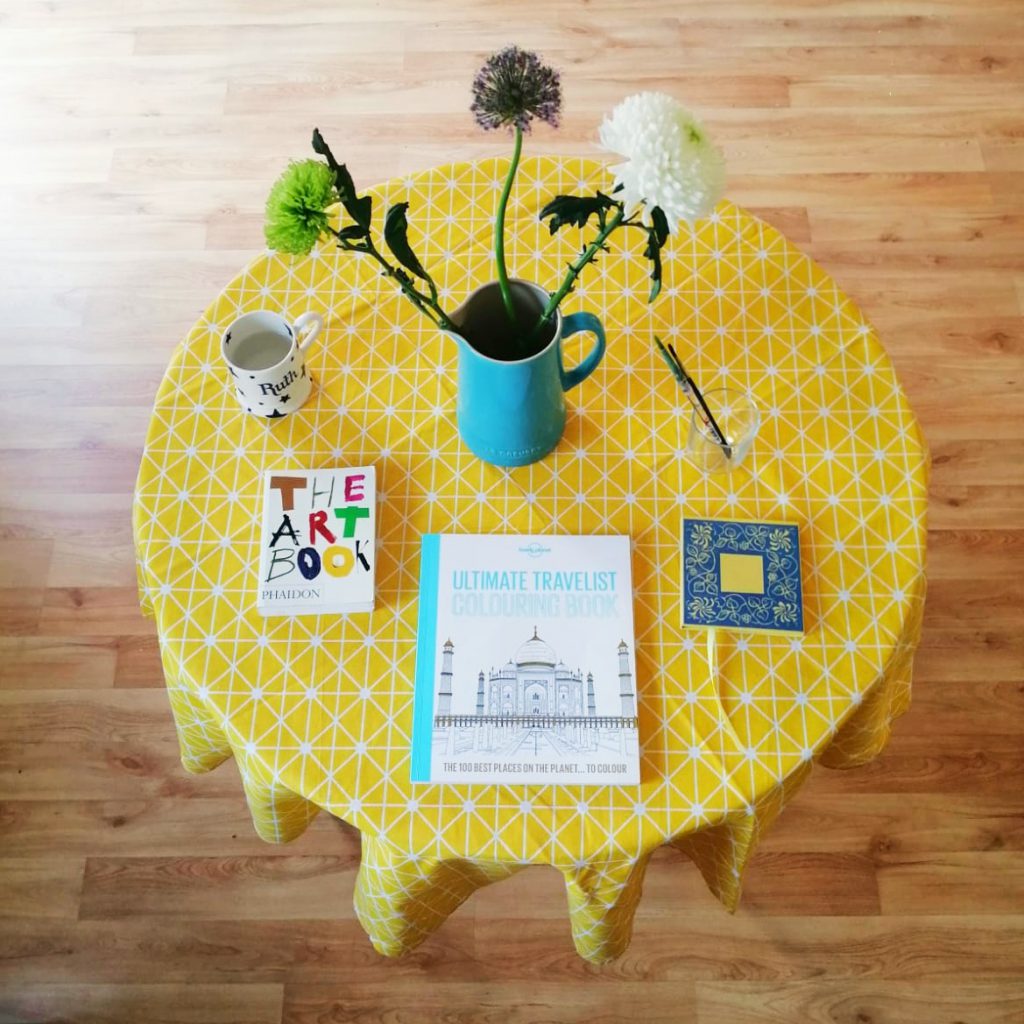