Gender is in vogue in the contemporary art world. However, it’s not a new story. Since the beginnings of art history, gender has been an important theme for many artists, who have used their practice to question the gender binary of ‘male’ vs ‘female’. Here are 7 artists who look at gender, deconstructing, reconsidering and breaking gender stereotypes. And gender in art history has been trending for a whole lot longer than you might think.

Let’s take a look at Baroque painter Artemisia Gentileschi. From the late 16th-century until the mid-1600s, she foregrounded female characters in her artworks, painting them as powerful, self-assured women. This contrasted with her male contemporaries’ imagery of passive, damsels in distress, too afraid to look at the gory scenes around them and shielding their eyes. Like women should do, apparently.

“My illustrious lordship, I’ll show you what a woman can do” – Artemesia Gentileschi.

Instead, her heroines appear composed and focused. Her painting of Samson sleeping on a strong, intent Delilah differs from Rubens’ depiction of Delilah as a bare-breasted seductress. This is one ferocious female character, completely in control.

Many artists have used self-portraits that emphasise the fluidity of gender, refusing to adhere to statically masculine or feminine characteristics.

“I paint self portraits because I am the person that I know best. I paint my own reality” – Frida Kahlo.

Today, Frida Kahlo has become an icon of feminism, freedom and gender fluidity. Her progressive attitude towards gender is apparent throughout her self-portraits, and she is instantly recognisable for her monobrow, strong features and slight moustache. She created a representation of Mexicana identity that actively challenged the expectations and preconceptions traditionally placed on Mexican women. She had no interest in conforming to social norms of gender.

Kahlo painted ‘Self-Portrait with Cropped Hair’ in the wake of a particularly tumultuous time, just months after she divorced her famous husband, Mexican Muralist painter Diego Rivera. He had always admired her long, dark hair, which, as she indicates in the tresses littering the painting, she had cut off after their split. She also shows herself in an oversized suit resembling the ones that Rivera wore. Through such emotionally and symbolically charged details, Kahlo expresses her feelings about her relationship with Rivera while also asserting her sense of self as an independent artist.

Artists have also addressed traditional notions of masculinity. Marcel Duchamp appeared in many portraits by the photographer Man Ray dressed as his feminine alter ego: the glamorous Rrose Sélavy, a pun on the French phrase “Eros, c’est la view”. She first emerged in portraits made by the photographer Man Ray in New York in the early 1920s, when Duchamp and Man Ray were collaborating on a number of conceptual photographic works. Rrose Sélavy lived on as the person to whom Duchamp attributed specific works of art, readymades, puns, and writings throughout his career.

By creating for himself this female persona whose attributes are beauty and eroticism, he deliberately and characteristically complicated the understanding of his ideas and motives. Rrose was an extension of the tradition of androgyny and gender bending in portraiture; after all, Duchamp remade the Mona Lisa as a man when he drew a moustache and beard on a postcard of da Vinci’s painting. His feminine pseudonym was less about trickery, as it was just one of many attempts to tease ideas about identity and self-representation, particularly in portraits of himself.

So you think you know Andy Warhol? He is most famous for his portraits of glamorous female celebrities and icons (Marilyn Monroe, Judy Garland, Elizabeth Taylor and more). But he had another side. Have you seen Warhol himself in drag?

A selection of photographic portraits from the series “Altered Image” features a heavily made-up Warhol wearing an assortment of women’s wigs and his signature blank stare. Produced in 1981, “Altered Image” was a collaboration between Warhol and his friend Christopher Makos, a photographer. The series was inspired by the photographs that Man Ray shot in the 1920s of Marcel Duchamp’s female alter ego, Rrose Sélavy. Five of the photographs in the show are color Polaroid self-portraits; the rest are black-and-white prints by Mr. Makos.

“We played with this idea of how people would perceive Warhol,” Makos says.

“When you put make-up on a man and change the way he looks and put a wig on, it completely changes the way you look at a particular person.”

Some have said that with these sessions he was trying to get closer to heroines like Marilyn Monroe, Liz Taylor and Joan Collins, whom he depicted in his famous silkscreens. Other people think he was exploring his feminine side.

Claude Cahun was a Surrealist photographer. Her work explored gender identity and the subconscious mind. Born Lucy Renee Mathilde Schwob, she adopted the gender-ambiguous name Claude Cahun in 1917 and is best known for self-portraits, in which she assumed a variety of personas.

“Shuffle the cards. Masculine? Feminine? It depends on the situation. Neuter is the only gender that always suits me” – Claude Cahun.

Here her image is duplicated by the mirror next to her – reinforcing the duality or multiplicity of identity, and the roles we play. Claude Cahun was championing the idea of gender fluidity way before today’s gender-fluid generation.

Many artists have used self-portraits that emphasise the fluidity of gender, refusing to adhere to statically masculine or feminine characteristics. Turner Prize winner Grayson Perry has taken this a step further. Fighting traditional male stereotypes (he recalls growing up amidst toxic masculinity and a violent stepfather), he has embraced a female alter-ego called Claire. Although “alter-ego” is a term he now dismisses. “It’s just me in a dress,” he says. In his work he creates hand-stitched quilts, pottery and outrageous dress designs, all conventionally considered more feminine art forms.

Thu Feb 20 , 2020
2 of my favourite contemporary painters are having shows this February 2020: Shani Rhys James and Kehinde Wiley. Both artists position women in traditionally decorative […] 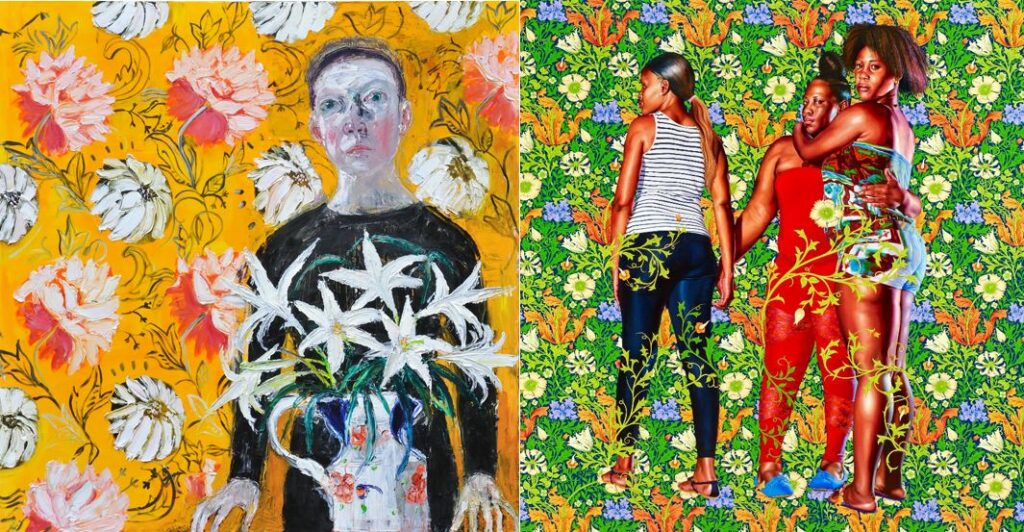