Liverpool artist, Steve des Landes, has landed a major show at Messum’s in London. It’s about time this powerful painter received the recognition he deserves for his modern narrative art, which celebrates the drama of everyday life in heroic terms and with a fairy-tale filter.

Autumn seems the perfect time to show the paintings of Steven des Landes. He paints people within medieval-style landscapes defined by a rich palette of reds, burnt oranges, yellow and gold. In many of his canvases, leaves and fruit have fallen to the floor, indicating the changing of seasons. Within woodland, gardens and rural plots, the artist represents the cycle of life as something to be commemorated and honoured.

There’s a fairy-tale feel – romantic, enchanting and dark – to the stories that Steve des Landes tells. An ominous air fills paintings such as ‘Truth be Told’, in which birds lie dead and dying beneath a canopy of trees. In myths and folk-tales, crows are often referred to as messengers from the Gods, both of good and bad news.

In the foreground of this painting, a lady from the village holds out one of the dead birds for the viewer to see: she’s unafraid of and unfazed by this closeness to death. The macabre is mesmerising. You want to reach into the painting to touch the long blue-black feathers, too.

In many of the artist’s tableaux, women appear as protagonists. They are strong energetic agents, resembling the cast of characters in the narrative paintings of Paula Rego, who appropriates history painting to focus on daily life and the lived female experience. Steve des Landes has spoken of his own significant female figures, recognising that women frequently carry the weight of caring, loving and losing in life. His pictures portray this.

Since the age of 7, Steve des Landes knew he wanted to be a painter. He was born in Preston, in 1962, and grew up in Southport, Lancashire. He trained at Southport Art College and Preston Polytechnic, and through the late 1980s and 1990s, worked from a studio in central Liverpool. For many years des Landes enjoyed a successful career as a muralist, and these recent canvases carry the social realist approach of many modernist mural artists who have focused on ordinary people, often working.

How does the artist start to tell his stories? “For me, a painting begins with fear,” des Landes observes. The image is already inside his head – the vision of what it will be. The fear is in wondering whether he will succeed in expressing that vision. He has “a traffic jam” of visions and ideas in his head right now, each work leading inexorably on to a new one. Beautiful, disturbing, perplexing, romantic, torn – in turn they are all these things.

There are also clear comparisons to be made between des Landes and Stanley Spencer, whose visionary stories unfold across the canvas. Like Spencer, des Landes attention to detail, allegory and use of vivid colours look back to the Pre-Raphaelites, whilst there is a Cubist quality to the geometric compositions and paintwork. This makes Messum’s the ideal gallery for his modern narrative art.

“Steve des Landes fits well into our interest in exceptional British figurative artists. His work has a new story to tell and is right for this moment as we all question how we live and what we are doing to our planet. des Landes’ paintings have a medieval quality, a narrative that speaks of human conditions reflecting his own inner experiences. Concern for lives as yet unfulfilled, they illustrate everyday experience” – David Messum.

Steve des Landes is not afraid to bring fear and unspoken tensions to the foreground of his paintings. At times, there’s an ambiguity to the events in his mythical yet modern narrative art. Why does the man turn his head away in ‘Anniversary’? What should we read into the upside down tumble of chairs in ‘Letting Go’? The more time you spend with these pictures, the more you see – and that’s what you want from art.

Interview | Ceviga Frahm on painting with her senses

Sun Sep 27 , 2020
Most artists paint what they see, but Ceviga Frahm paints what she senses. Ceviga has always integrated her synaesthetic condition – Extrasensory Perception (ESP) – […] 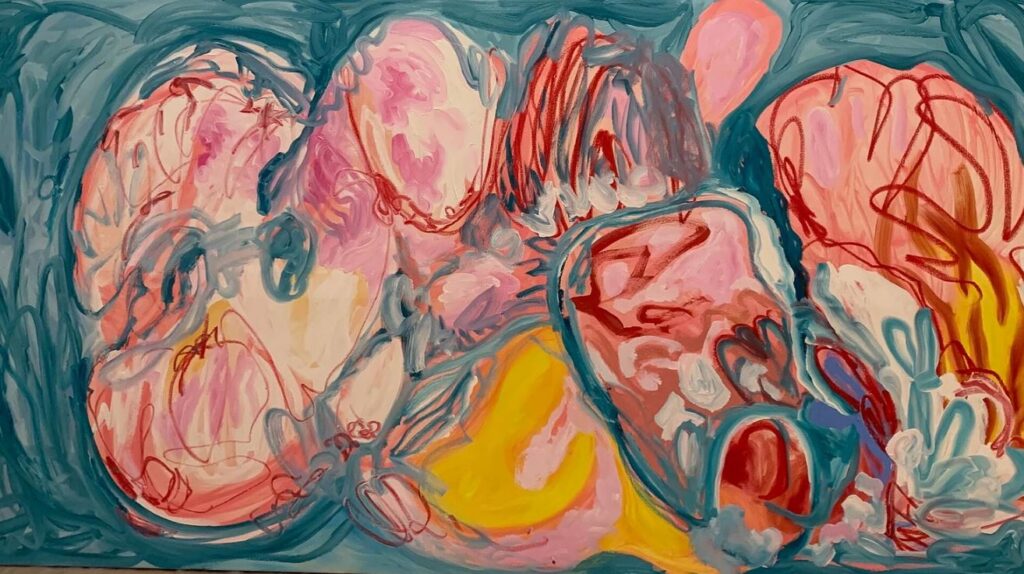