Anne Guest uses the magical process of cyanotype printing to create striking, ethereal images in which white silhouettes of flora emerge from washes of blue. She is one of the leading cyanotype artists in the UK, exploring and celebrating the natural world through this traditional type of photography, which dates back to the 19th century. Cyanotype printing has a great feminist history, too, which Anne pays tribute to, with her imagery of female botanists.

What is a cyanotype?

First of all – what is a cyanotype, exactly? Invented in the 19th century, cyanotype is a photographic process creating images without a camera. Two chemicals, ammonium citrate and potassium ferricyanide are mixed together to create a photosensitive solution which is painted onto the surface of watercolour paper and left to dry. This process needs to be conducted away from UV light and once dry the paper must be kept in a light proof bag until it is used.

Photograms are created by placing a flat object, such as leaves or flowers, onto the surface of the treated paper. A piece of glass over the top can keep it in position. The paper is then exposed to ultraviolet light, either the sun or a UV light. When using the sun, exposure times vary depending on the strength of the sun, time of day, weather, time of year and the object being imaged.

This magical method produces a cyan-blue print, from where the term cyanotype comes from.

Since its origins, cyanotype printing has been used to picture the botanical world. It was developed in the 19th century by female botanists, who used it to capture images of the flora they collected.

English botanical artist, collector and photographer Anna Atkins was the first person to illustrate a book with photographic images. She merged art and science: cyanotype impressions provide enough detail to distinguish one species from the next, they were also imaginative compositions.

Anne Guest draws on this feminist, botanical history of cyanotype printing in her own practice. Her recent series of portraits evolved as a celebration of the women who have contributed to the study of nature throughout history, but have too often been overlooked.

Anne also creates cyanotypes celebrating the natural world. The view from her studio in Worcestershire is open countryside, which allows her to make art about nature, and be inspired by what she finds on her doorstep.

“Natural history has always been a passion of mine and one of my first memories of primary school is taking a beautiful moth that I had found to show my teacher! I still look at the natural world with the same awe and wonder that I had then, but am much more aware of the increasing fragility and vulnerability it faces because of today’s environmental challenges” – Anne Guest.

‘Under the Sun’ is a new series of work in which Anne celebrates the beauty and fragility of the flora of wildflower meadows that she has discovered whilst walking locally. She explains her interest in them:

“Meadows are an intrinsic part of the UK’s natural and cultural heritage but now only a tiny fraction of them survive. They are a reminder of the former abundance of wildflowers in the farmed countryside.

The cyanotype process was developed in the mid 1800s when wildflower meadows were abundant. By using this process to make work about wildflower meadows today I am reaching back to the past in order to record the present and preserve it for the future.

The small details in gold metal leaf emphasise the preciousness of the meadows”.

Anne Guest is represented by SUPA, a gallery which sells contemporary art by exciting and emerging artists based in Birmingham and the Midlands. Head over to SUPA gallery to find Anne’s beautiful cyanotype art on sale.

Anne Guest graduated from Birmingham City University with an MA in Fine Art in 2006. She exhibits regularly, both nationally and internationally, and has been shortlisted for several prize exhibitions including the Jerwood Drawing Prize and the Ruskin Drawing Prize. Her work is held in both private and public collections.

Sat Jul 25 , 2020
‘To the Trees’ is a new online exhibition in which Monica Perez Vega transports us into an enchanted forest of abstract tree paintings. Hosted by […] 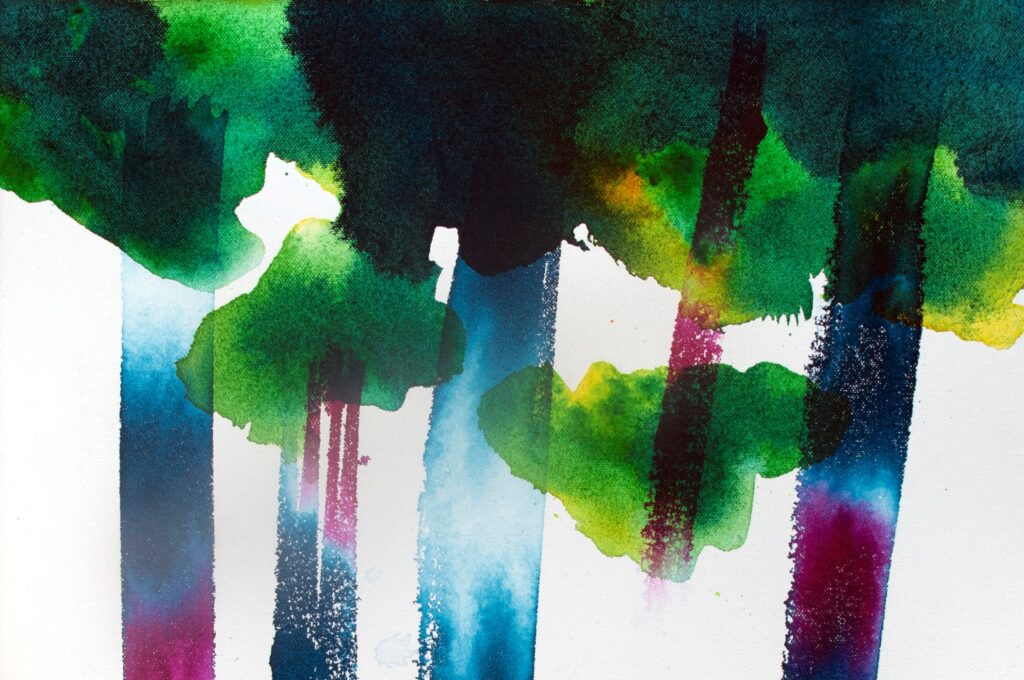