During the late 19th and early 20th century Birmingham was at the centre of the jewellery trade in the UK. It was also a centre for the Arts and Crafts Movement, with artists drawing inspiration from William Morris’ decorative, patterned designs of the natural world. Georgina ‘Georgie’ Gaskin (1866-1934) was one of these artists, who turned from illustration to jewellery design, celebrating craftsmanship and botanical imagery in her unique, elegant pieces, which are still popular today.

Arts and Crafts Movement: from fine art to jewellery

William Morris was one of the founders of the Arts and Crafts Movement, along with the theorist and critic John Ruskin. He was disillusioned with the mass-produced goods being made in an increasingly industrial Victorian Britain. Instead, he promoted and focused on the execution of traditional designs – across art, architecture, design, furniture, jewellery and textiles – handmade by skilled artists.

The Arts and Crafts Movement was strongly influenced by the paintings of the Pre-Raphaelite Brotherhood, who sought to modernise art by reviving the practices of the Middle Ages and turning to imagery of the natural world. Whilst studying at the University of Oxford in the 1850s William Morris became friends with the painter Edward Burne-Jones: together they teamed up with Dante Gabriel Rossetti, Arthur Hughes and others to decorate the Oxford Union debating chamber with Arthurian murals. From there, Morris, Burne-Jones, Rossetti and others founded a decorative arts firm, Morris & Co, inaugurating the Arts and Crafts Movement through a celebration of natural forms, artisanal craftsmanship and collaboration.

In contrast to mainstream goods, machine-made to perfection, the Arts and Crafts style embraced flaws because they highlighted the work of the individual. Equally important to Morris and his followers was the search for a new English style, inspired by images from folklore, the medieval age and nature.

It was against this backdrop that Georgie was first studying, and then teaching, at the Birmingham Municipal School of Art. Here she met her husband Arthur Gaskin, and both became influential members of the Birmingham Group of Artist-Craftsmen in the 1890s. William Morris visited the Birmingham School of Art on several occasions with Edward Burne-Jones, and the Gaskins moved in the same circles as the Pre-Raphaelites. Their house was at the centre of Birmingham’s bohemian circle at the time: they held regular soirees, recitals and discussions for local artists and designers, counting amongst their friends Burne-Jones and his wife Georgiana, whilst William Morris’ daughter May was a godmother to Margaret, one of the Gaskins’ two daughters.

The Gaskins were established artists before they became jewellery makers. Their early illustrations reflect the influence of the Arts and Crafts Movement, which they then began to apply to jewellery-making at the start of the 20th century. They embraced the city’s tradition of metal work, drawing on its strength of small, independent workshops. 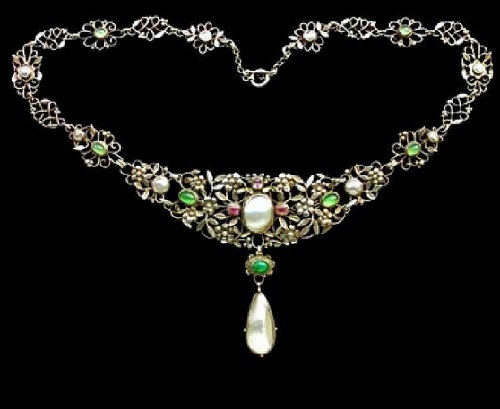 Although they always exhibited their jewellery under their joint names, ‘Mr & Mrs Arthur Gaskin’, contemporary accounts note that it was Georgie who designed the jewellery, while Arthur focused on the enamelling.

Georgie created elegant designs inspired by nature and organic forms in which leaves and flowers are common motifs. As she developed as a jeweller, the work became increasingly ornate: pendant necklaces typically feature entwined flowers and swirling leaves, set with colourful gemstones and adorned by intricate enamelwork. The influence of William Morris’ decorative designs is very clear.

“I did all the designing and he did all the enamel, and we both executed the work with our assistants” – Georgie Gaskin.

Typical of Arts and Crafts jewellers, the Gaskins chose to use less precious metals, like silver, than the typical diamond-encrusted gold most popular in Victorian jewellery. Silver also revealed the construction of the piece and touch of the jeweller. Gemstones were primarily used just as accents rather than focal points and stones were often chosen for their colours, rather than their monetary value. Pearls were popular , though the ones used were not perfectly rounded, in contrast to mass-produced jewellery.

Women in the arts

The Arts and Crafts Movement is remembered as a period of change for women artists; female students were able to study art and design to a similar level as their male counterparts. Subsequently, there was an outpouring of talented young female artists during this period, who were greatly attracted to the principles and aesthetic of the Arts and Crafts Movement. Women, such as Georgie, exhibited their works and taught at the schools, marking a leap forward in equality within the art world. 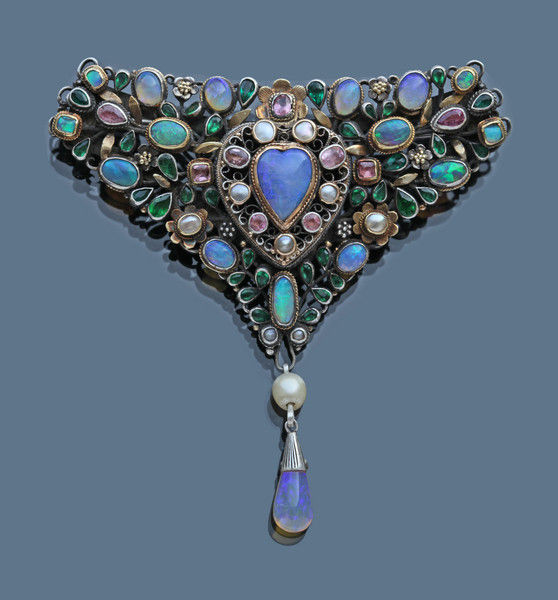 The Gaskins started to exhibit their exquisite jewellery in 1901 at the Glasgow International Exhibition. In 1907 they exhibited some of their early jewellery designs as part of a Birmingham Group show at the Fine Art Society and then at The Arts and Crafts Society Exhibition at the Grosvenor Gallery in 1912. Retrospective exhibitions have been held at the National Museum Zurich (2017) and at Birmingham Museum and Art Gallery (1982).

Georgie continued to design and make jewellery with her husband until after the First World War. The couple’s importance in disseminating the English Arts and Crafts style to an international audience in the early 20th century is unmistakable. Pupils of Georgie and Arthur include Kate Eadie and Bernard Instone, whose work is in a similar style.

All that glitters is… in Birmingham Museums

Jewellery by the Gaskins can be viewed in the collections of Birmingham Museums, as well as the Victoria & Albert Museum, and regularly comes up for sale in auctions and commercial galleries.

Time to get bidding?

Wed Mar 14 , 2018
Birmingham’s Ikon Gallery is turning 20! To celebrate, the gallery is opening its new exhibitions on 21st March, exactly 20 years to the day since the […] 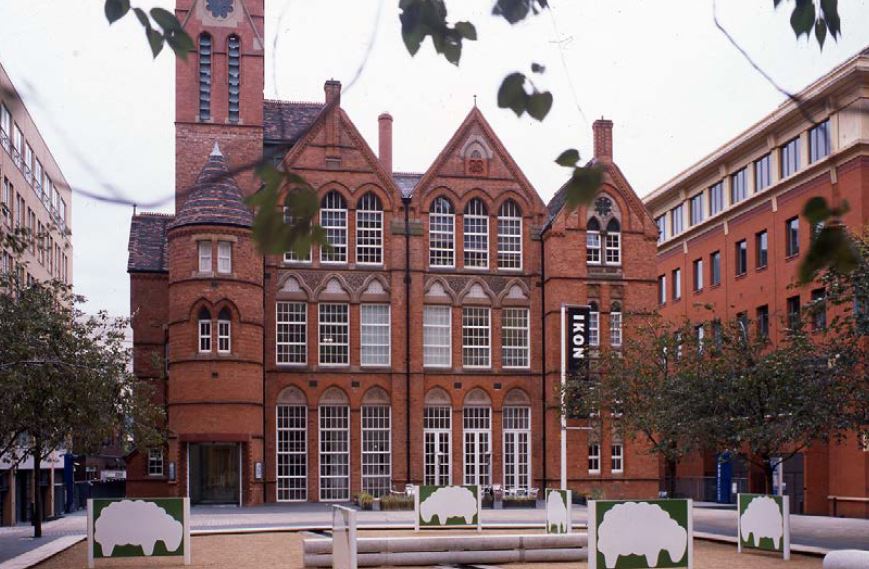