The first time I saw her I didn’t realise that she was blind. I’d come to the museum with my sketchbook; she was sat, unmoving, on a wooden bench, surrounded by paintings.

During the next few weeks I noticed her numerous times, always on the same bench in the Pre-Raphaelite gallery. I observed her petite frame enclosed in a large black coat, her short, greying hair, her stillness. It was when I smiled at her, receiving no response, that I realised; the white cane by her boots confirmed her blindness.

She was the first to speak, one afternoon, after I had pushed my way to the museum through leaves collecting in the tram tracks.

“It’s you again”, she acknowledged. I was taken aback: how did she know? “Come and sit next to me”, she tapped the bench; I joined her.

“So, tell me, what keeps bringing you back?”.

I had been asking myself the same question about her but answered openly, “I’m intrigued by these paintings”.

“Yes, I always see something new in them”.

“I’m Mina, by the way. I’m studying at Birmingham School of Art”.

“I’m Anna”, she felt for my hand, formally shaking it.

Over the next few weeks Anna and I met frequently in that room; I couldn’t keep away. She would ask me to describe the paintings, drawing out details I hadn’t seen initially. She also listened as I told her about my decision to study art, without my family’s approval. “Art? That’s not going to get you a job”, I relayed my father’s angry, mocking reaction to her. “Let go of what they want”, Anna advised.

It was on a darkening afternoon that I found waiting in her place a gallery steward.

“Mina?”. He handed me a piece of paper, on which was written, shakily, an address with ‘7pm Tuesday — Anna’.

Tuesday came: I found myself knocking on the door of a grand, white Victorian house, opened by Anna.

“Mina?”, she reached out for my hands. ‘Thanks for coming, there’s something I want to show you”.

I followed her down a long hallway and into a vast drawing room; I was amazed to find every wall covered with paintings in ornate, golden frames.

“I know you’ve been wondering why I visit the museum; I like to listen to the conversations that people have about the art. I also wanted to know if anyone would come to look at this”.

She felt her way towards a table on which was laid an exquisite canvas: amidst an overgrown, emerald green forest a couple were clasping hands.

“Yes, The Long Engagement by Arthur Hughes — I was an art collector for 20 years. I want to thank you Mina: you’ve helped me realise, now that my sight is fading, that it’s time for other people to appreciate my collection. I need to let go. I’ve decided to donate this painting to the museum, where it deserves to be seen”.

This flash fiction was inspired by the Pre-Raphaelite collection on display at Birmingham Museum & Art Gallery.

Tue Oct 24 , 2017
Harriet Hathaway was recently appointed as Decorative Art Assistant Curator at Nottingham Castle. She graduated from the University of Birmingham in 2015 with First Class […] 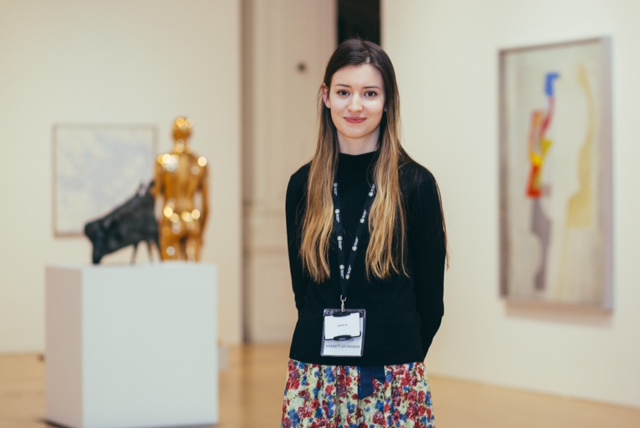