The idea that female artists have been underrepresented in museums, galleries and art history writing is not new. Many of us are unfamiliar with a large proportion of women in art, with men generally overshadowing their representation in public and private collections and shows.

With March marking Women’s History Month, what better way to celebrate than with a look at some of the most important and influential female artists from past to present. In an effort to highlight some of the key figures in women’s art and the history of art on the whole, I’ve compiled a list of 10 female artists you should know.

Known for her portraiture, Anguissola was a late Renaissance painter and one of the first female artists to establish a reputation on an international level. She developed her skills under the tutelage of Bernadino Campi and later Bernardino Gatti. Her reputation growing, she was invited to be part of the court of Philip II in Madrid in 1559, where she continued her work as an artist. Surpassing all cultural expectations imposed on women at the time, she became one of the most famous portraitists of her age. Some of her most famous works include The Chess Game (1555), Bernardino Campi Painting Sofonisba Anguissola (1559) and Portrait of Queen Elizabeth of Spain (1545-1568).

One of the greatest and most-well known painters of the Baroque-period, Gentileschi developed her artistic style under the guidance of her father Orazio. An accomplished painter himself, Orazio was friends with Caravaggio. She suffered many tragedies throughout her personal and professional life, most notbaly losing her mother at the age of 12 and being raped by Agostino Tassi. Refusing to marry her, Tassi was taken to court by Orazio. He was found guilty and sentenced to be exiled from Rome. Yet, due to his artistic skills, he was protected by the Pope and the sentence did not come to fruition. Following this traumatic period, Gentileschi’s later paintings were heavily influenced by the experience, featuring scenes of women being attacked by men or in positions of power and seeking revenge. For all the drawbacks in her life, she managed to achieve the unheard of by flourishing in a male-dominated field. Her most notable works include Susanna and The Elders (1610), Danae (1612) and Judith Slaying Holofernes (1620).

Dutch Golden Age paint Leyster was one of only two women to be accepted into the Haarlem painters guild during the 17th century. Her works were mainly genre paintings and portraits, which were signed by her with her first initial and a star, a play on her last name. Due to years of misattribution following her death, she fell into the abyss of history for centuries, with many of her works being attributed to her artist husband Jan Miense Molenaer or her main rival Frans Hals. She remained relatively unknown until the late 19th century, and investigative work continues to reveal more of her pieces. Famous works of hers include Jolly Toper (1629) and The Carousing Couple (1630).

A leading portraitist of the 18th century, Vigée Le Brun was sought after for her flattering and elegant style. She was considered one of the most fashionable portraitists of her time and learnt her skills under the training of artists like Hubert Robert and Jean-Baptiste Greuze. Her clients included aristocracy and royalty, painting prominent figures such as Marie Antoinette, the Duchess of Polignac and Madame du Barry. Following the French Revolution, she spent much of her time travelling Europe, visiting Italy, Germany and Austria before spending 6 years in Russia. Known for her artistic abilities and previous experience she was employed by Empress Catherine II to paint for Russian royalty and aristocracy. Notable works include Portrait of Marie Antoinette (1783) and Self-Portrait with Her Daughter, Julie (1780-1819).

Famous for her paintings of animals and landscapes, Bonheur was a force to be reckoned with. She developed her technique by studying animal forms on farms, stockyards, horse fairs, markets and slaughterhouses. Her work gained recognition in France, Britain and the USA and she exhibited at the Salon de Paris regularly. Renowned for her liberal outlook and rebellious personality she dressed as a man, cut her hair short and smoked cigars. For this, she is considered an influential character in the developments of early feminism. She wrote that due to her father’s influence “I owe my great and glorious ambition for the sex to which I proudly belong and whose independence I shall defend until my dying day.” Famous works of hers include Plowing in the Nivernais (1849) and The Horse Fair (1855).

Fleeing to Paris in 1917 during the Russian Revolution, Polish artist Lempicka was best known for her Art Deco portraits of aristocracy and the wealthy, as well as risque nudes. Beautifully depicting the glamor, sophistication, elegance and modernity of the interwar years, she offers the viewer a window into the luxuriousness of the bourgeoisie and the lavish lifestyles of the aristocracy. Inspired by the nude paintings of French painter Ingres, and the decadence of Boticelli and Cubism, her portraits are unique and extraordinary often representing hedonism and sexual freedom. She received considerable acclaim which catapulted her into the social limelight, bringing with it parties and love affairs with both men and women. Notable works include La Belle Rafaela (1927) and Self-Portrait (1929).

Growing up on a farm in Wisconsin, O’Keeffe later studied at the Art Institute of Chicago and later in the 1920s becoming the first female painter to gain respect and notoriety in the New York art scene. Combining abstractism and realism, she was primarily known for her paintings of New York skyscrapers, landscapes and flowers. In the 1950s she began travelling, painting the breath-taking sights she visited, such as Peru’s Andes mountain tops and Japan’s Mount Fuji. Later in life, she was diagnosed with a condition that left her partially blind. Yet, even at the age of 90, the defiant artist called upon assistants to help her continue her love of creating art. Important works include Abstraction White Rose (1927), Rust Red Hills (1930) and Ladder to the Moon (1958).

No list of female artists can be complete without mentioning Kahlo. Contracting polio at the age of 6 and suffering a life-changing accident in 1925, the odds seem stacked against her. Yet, the defiant Kahlo survived, recovered and developed into one of Mexico’s greatest artists. Her work is heavily associated with Primitivism, Surrealism and Indigenism and was heavily influenced by her husband, artist Dego Rivera. She held several exhibitions in both the United States and Europe and her self-portraits were infamous internationally. Famous pieces include Self-Portrait with Thorn Necklace and Hummingbird (1940) and Me and My Parrots (1941).

Sometimes referred to as “the princess of polka dots”, Kusama puts dots into everything she creates from her paintings and sculptures to her performances and installations. Her reason for this, she says, is that when she was a young girl she had a hallucination in which she was in a field of flowers which all started talking to her. As far as the eye could see, there were endless dots. She started drawing and painting from a young age, and after studying at art school in Japan she moved to New York in the 1950s. Inspired by fellow artists Donald Judd, Andy Warhol and Joseph Cornell, her art is closely linked to pop art and minimalism. Notable pieces include Infinity Net (1979) and Fields in Spring (1988).

An early proponent of Op Art, Bridget Riley is one of Britain’s most famous female artists. Studying at Goldsmiths’ College and later the Royal College of Art in the early 1950s, her early work was based on stylistic methods taken from semi-impressionism and then pointillism. During the 1960s, her style evolved and she began exploring optical phenomena, which became known as the genre Op Art. Working initially in black and white and later colour, this work, through optical illusions produced a disorienting effect on the eye. During this epoch she started to attract widespread attention, landing a solo exhibition at New York’s Museum of Modern Art, and later being awarded the International Painting Prize at the Venice Biennale in 1968. Key works include Fall (1963), Hesitate (1964) and Nataraja (1993).

One of the most prolific American artists of her generation, Walker specialises in creating black-and-white silhouettes. Studying first in Atlanta and then Rhode Island, she developed her artistic skills, drawing upon themes of African-American racial identity, as well as issues of sexuality and violence. After her work was shown in a talent show in New York in 1994, she began to gain momentum and has developed into one of the most widely known artists both nationally and internationally. Also working with drawing, painting, shadow puppetry, fim and sculpture, she says that she wants the viewer of her work to “either giggle nervously, get pulled into history, into fiction, into something totally demeaning and possibly very beautiful.” Notable works of hers include The Emancipation Approximation (1999) and Resurrection Story with Patrons (2017).

Charlotte is a writer and editor based in Barcelona, Spain. After earning her MA in Politics and Contemporary History, she moved to Rome and later Barcelona. Being exposed to the vast array of classical and contemporary art in these diverse European cities, she developed a passion for art. Now, she writes for arts publications and helps manage and curate at a small gallery. When she’s not working, you can find her checking out the city’s exhibitions and sipping on the local cava.

You can find her on Instagram @charlotte.l.stace and at www.cseditingservices.com/ 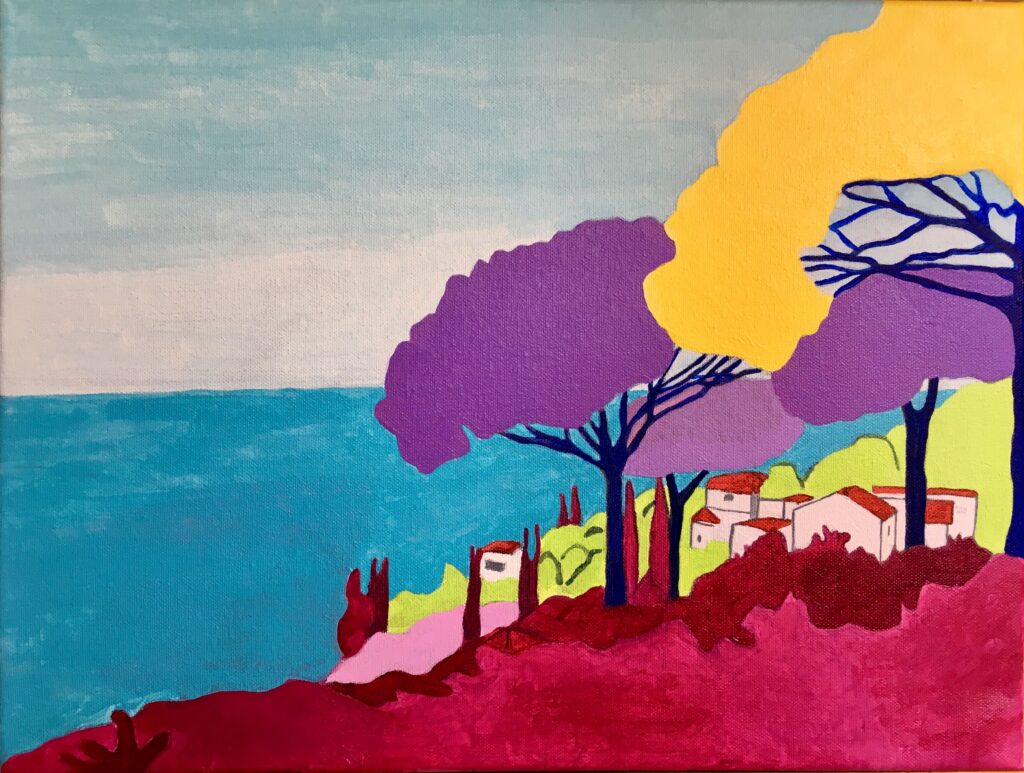