Lucian Freud was a master of modern portraiture, whose muses were friends, lovers, wives, children and fellow artists. In the show ‘Lucian Freud: Real Lives’, Tate Liverpool has shone an important light on the huge commitment of these sitters to the artist, who would pose in his studio for hours at a time, collaborating with him for weeks, months and sometimes even years.

As great a painter as he was, Freud is just as notorious for his bad behaviour: he gambled compulsively, had a violent temper and was a rampant adulterer. When asked how many children he had fathered, Freud would reply that he hadn’t “the slightest idea”. It’s impossible to separate art from artist, and he joins the ranks of many male painters whose brutality extended beyond the canvas.

But, this narrative has at times overshadowed the positive relationships Freud held with many of his muses, as well as their significant contributions to his career. Tate Liverpool’s exhibition shows another side to the painter and reframes the focus on his life models.

The exhibition includes some of Freud’s most celebrated works, including portraits of his long-time studio assistant and friend, the painter David Dawson, as well as his first wife Kitty Garman. In the exquisite portrait ‘Girl with a Kitten’, Garman holds a kitten by its neck in a tense grip, in an unsettling image of control. It hints at the process of portraiture itself. As Freud once explained about his early works with sitters such as Garman, ‘I would sit very close and stare. It could be uncomfortable for both of us.’

Among the most intriguing portraits are those of the legendary performance artist Leigh Bowery. Freud was fascinated by Bowery’s use of his body as a sculptural object in his performances; the extraordinary costumes he created for himself played on fashion, fetishism and gender fluidity. However, over the course of 4 years, Freud stripped Bowery down to his naked flesh. Bowery didn’t find the process uncomfortable but instead enjoyed acting as Freud’s model: ‘I love the psychological aspect of his work – in fact I sometimes felt as if I had been undergoing psychoanalysis with him … His work is full of tension. Like me he is interested in the underbelly of things.’

Another particularly poignant image is a sensitive painting of the artist’s mother, Lucie Freud. She sat more than one thousand times for 18 portraits over the course of a decade, with the sittings lasting between four and eight hours and each portrait taking several months to complete. Here, she looks lost deep in thought, having recently lost her husband and suffering from depression at the time. One constant is that the painter’s subjects are always absorbed in their own worlds. In fact, one of the insightful wall labels reveals that Freud, once the favourite child, said he could only paint his mother once she’d ‘lost interest’ in him.

Throughout the exhibition, Freud’s muses stare off canvas, away from the artist, as if both allowing the painter to portray them but also escaping to another plane altogether. It’s only in his self-portraits that the artist, submitting to the same scrutiny as his muses, stares straight back.

Tracing his development as an artist from the late 1940s to his death in 2011, Tate Liverpool’s Freud show provides an intimate glimpse into his relationship with his many muses. It’s a transfixing take on the real people who inspired, and posed, for him.

Sun Jan 23 , 2022
Hundreds of china cats are currently sat inside Wolverhampton Art Gallery. Cabinets are filled with rows of porcelain feline figurines, of all shapes and sizes, […] 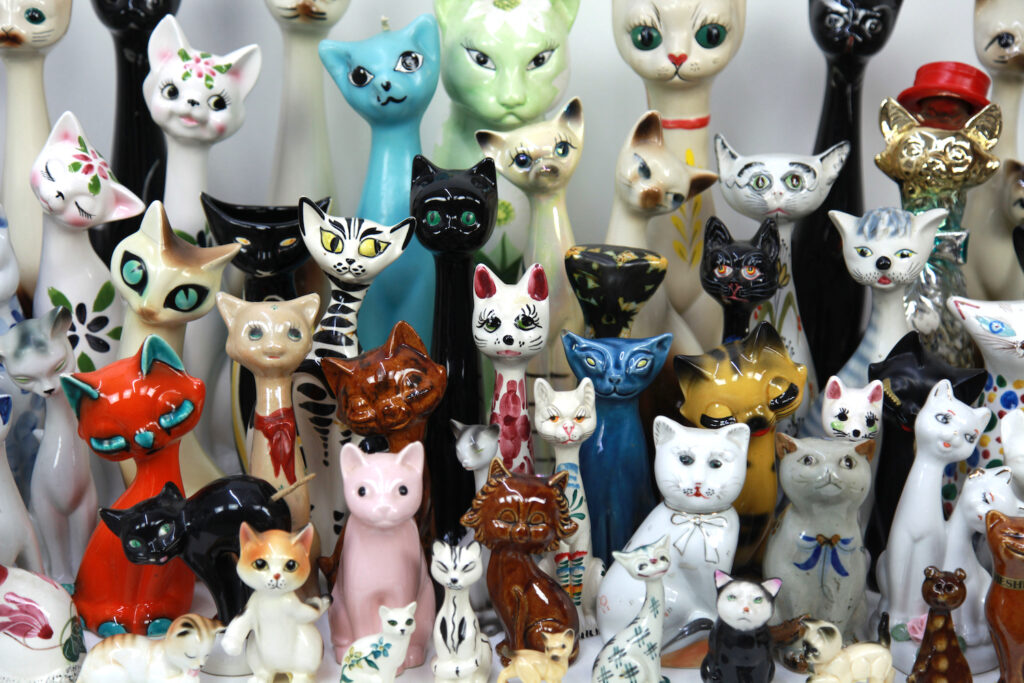