Sydney-based American artist Kim Leutwyler is increasingly gaining recognition for her paintings of LGBTQ-identified and queer-allied women. Exploring the line between glorification‚ objectification and modification, Leutwyler hopes to “start a positive dialogue around equality, gender and identity”. Rendered in bold, flat colours across heroically scaled compositions, her subjects certainly seem to celebrate and affirm the mutability of gender, across all borders.

Can you tell me about your subjects – how do you choose/approach and then work with them?

I have chosen to focus on queer-identified and allied women, most recently focusing on those closest to me. I also approach activists and advocates who champion women such as Clover Moore (Lord Mayor of Sydney) and Briony Mackenzie (CEO and Founding Director of the Global Women’s Project). Once they’ve agreed to sit for me we meet up at my home or theirs and my partner takes thousands of photos while I sketch or capture images of lighting and details I may want to reference later. If my sitter has the time and patience I’ll have them sit for me at the studio for a couple of hours. I find this particularly important if the subject is someone I haven’t spent a great deal of time with. I’m always staring at my friends analysing their faces for lines, colours and details which makes them infinitely easier to paint! I don’t aim to create a photo-realistic rendering, but rather to convey my impression of the subject.

As a feminist member of the LGBTQI community, do you feel a duty to voice your opinions and beliefs through your art?

I wouldn’t call it a duty, but rather a passion. I hope that my work can start a positive dialogue around equality, gender and identity.

Your clean lines and bright palette remind me of David Hockney. Do you like his portraits?

I do! I’ve never been one to go out of my way to see Hockney’s work but I am very drawn to his colour palette.  I am particularly fond of his latest iPad drawings.

Which other artists inspire you?

Robert Rauschenberg. I can’t explain it, but his ‘Collection’ combines painting was the first artwork that made me stop in a very crowded museum and stare for 45 minutes. I visually consumed it from every angle and digested it into my brain. The only other artist whose work has made stop dead in my tracks that way is Ben Quilty.  I also really enjoy works by Cecily Brown, Jake and Dinos Chapman, Jenny Saville, Margherita Manzelli and Romaine Brooks.  There’s also a giant list of Australian artists who inspire me and we’ve built a great little community of support for one another both online and in person!

Can you tell me about your formal art education/training at the School of the Art Institute of Chicago? Were you trained in painting there?

In my undergraduate studies my artistic practice was focused entirely on printmaking and ceramics. After receiving two degrees at Arizona State University (Art History and Studio Art) I quickly realized that I needed to turn to a more easily accessible medium that did not require renting out giant machinery and kilns. I decided to explore painting because of its primarily masculine history in the western art canon. My flatmate at the time was a brilliant painter and taught me the foundations in our living room.

Eager to learn more I applied to several prestigious art schools and was accepted into the Painting and Drawing program at SAIC.  My time there was spent almost entirely in studio classes from morning until night learning from artists whose work I had studied in my previous Art History courses. Artists like Phil Hanson and Rebecca Shore taught me how to broaden my subject matter and try new techniques. Carl Baratta taught me how to ‘steal’ colours, imagery, concepts and compositions from other artists. Claire Ashley taught me how to create a sustainable practice and build relationships with galleries and artists… all skills that continue to make a significant impact on my artistic practice.

Do you believe that the ‘traditional’ art form of painting has a place in the contemporary art world?

Painting has been declared ‘dead’ so many times since the invention of photography in the 1830s that I’ve lost count. In the early 1900s Conceptual art also subverted the medium by elevating everyday ready-made objects to the status of art. I do believe that painting, especially figurative work, belongs in the contemporary art world as a visual manifestation of each artist’s perspective.  Painting is more alive than ever because it is not a necessary tool for visually representing people, places, stories or events after the invention of photography.  In most cases contemporary artists choose to paint because of their passion and intention rather than serving a utilitarian purpose, or for imperial, private, civic, or religious patrons.

Where did your interest in pattern come from?

It started with the Pre-Raphaelites:  I was fascinated with textiles and patterns employed by the Pre-Raphaelites to contemplate moral issues of justice, beauty, piety and the struggle against corruption.  When I began painting women in front of their favourite patterns I was quickly introduced to the work of Kehinde Wiley, who is best known for his realistically rendered portraits of heroic figures depicted in front of decorative patterns of various cultures.  Upon realizing there was another artist exploring similar juxtapositions I looked to history for further inspiration. I was drawn to the paintings of Tenebrists like Caravaggio who worked on black gesso, painting only where the light hits a person or object. I began to incorporate bright patterned backgrounds with tenebrism, blending abstraction and pattern where the subject’s shadows should be.

Dialogues about gender and transgender are hot topics right now; what are your thoughts on the gender roles that we are expected to play? And how do these play out in your paintings?

Gender roles are constantly evolving, and there are a multitude of societal and cultural permutations of gender roles around the globe that make this question so hard to answer. The ‘ideal female’ has changed over time, with varying aesthetics that metamorphose based on age, race, geography and sexual orientation.

I explore a very small percentage of the queer-identified and allied population in my work. Androgyny, body art, gender confirmation surgery and piercings are not uncommon among the people you see in my work. I hope that I get the opportunity to meet and paint an even larger and more diverse pool of the population in the near future. If anyone is interested in being painted please do reach out!

Do you believe that the objectification of women will always be a part of life?

If human history is any indication then I believe the objectification of people in general will be a part of life. The topic of objectification spans more than just sexuality. When we deny people their autonomy and their voice the cycle is perpetuated. We need to have respect for one another’s experiences and empathize with them as human beings. Empathy will bring with it justice and equality.

What are you working on at the moment?

I am always working on at least 3 collections at a time.  Currently my passions are figurative portraits amidst abstract and patterned backgrounds, landscape portraits and queer dinosaur portraits!

Leutwyler’s recent accolades include being selected as a finalist in the 2015 Archibald Prize, 2017 Bluethumb Art Prize, 2016 John Copes Portrait Prize and the 2016 Portia Geach Memorial Award. She also won the Midsumma Visual Arts Guide Cover Competition, and her painting was the hero image for the 2016 LGBTQ Festival in Melbourne, Australia. 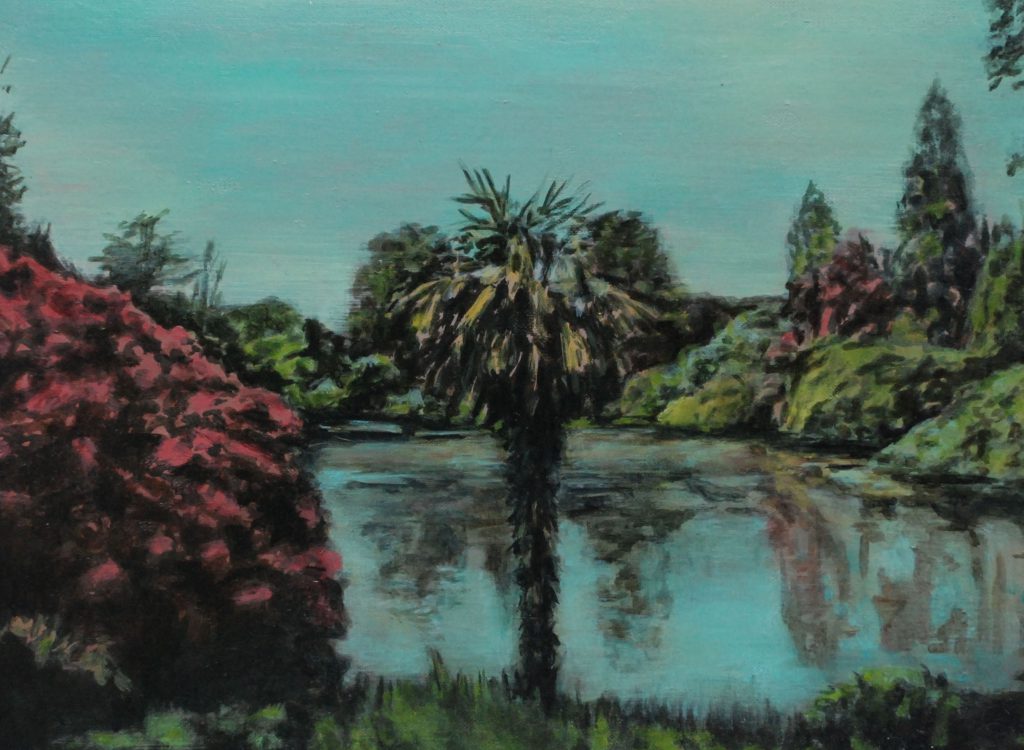