When we think of artists, our minds automatically jump to the likes of Andy Warhol, Vincent van Gogh, Barbara Hepworth and Leonardo da Vinci. Can you spot a theme within this list of artists? None of them are Black. For far too long now, Black visual artists have been swept under the radar, and kept invisible. Art history has largely erased, overlooked and ignored Black artists, whose contributions have been immense. With the recent global protests for the Black Lives Matter movement, it’s about time we ensured that the works of Black artists are celebrated, platformed and inserted into art history. In this blog post we take a look at both historical modern Black artists, and the art of contemporary Black artists today.

During the 19th and 20th centuries, Black modern artists threw away tradition to confront racism and inequality with powerful artworks. Let’s meet some of the most important figures…

Duncanson, born in 1821, was of European and African descent, and was well-known for his self-taught landscape paintings. He produced his first dateable work in 1841, an astounding twenty-four years before the abolition of slavery in the US. His most widely acclaimed work, however, is of course a piece of landscape called Land of the Lotus Eaters, produced in 1861. Duncanson himself knew this painting would be a masterpiece, and planned on exhibiting it in Europe before he had even started painting it!

Born in 1877, Fuller was at the fore of the Harlem Renaissance. She was known as a poet, painter and sculptor, and adopted a horror-based style by choosing to depict events of racial injustice within her art pieces. Possibly her most notable work, because of its relation to the horror and violence of racial injustice, is her painted sculpture of the lynching of Mary Turner. Here, Fuller is using art to call out against the injustice of the treatment of black people during her lifetime, and she is therefore a true hero. Despite this modern interpretation of her work, Fuller was shunned in America because of her race and her art was called ‘domestic’. This is certainly not the opinion we should have of her today.

Lewis is to be celebrated for doing the impossible: she gained prominence in the US during the American Civil War. She also became the only black woman recognised to any degree by the American artistic mainstream. These achievements are truly astounding given the fact she was born in 1844, twenty-one years before the abolition of slavery. Lewis was inspired by the lives of abolitionists and Civil War heroes. This included Robert Gould Shaw, the commander of an African American Civil War regiment. Lewis made plaster cast reproductions of his bust, and it became her most famous work, allowing her to make enough money to move to Rome. Lewis’ career was outstanding in its success, and she is proof of the often-ignored talent of black people. She will be ignored no more.

“As the first black-Native sculptor of either sex to achieve international recognition within a western sculptural tradition, Lewis was a symbolic and social anomaly within a dominantly white bourgeois and aristocratic community” – Charmaine Nelson

Savage is definitely the baby of the group, being born in 1892. She, like many of the other contemporary artists we have seen, was associated with the Harlem Renaissance, and she worked towards equal rights for African Americans in the arts. Within the art world, Savage was well known for her clay sculptures, after her love of making clay animals as a child, despite her father believing it to be a sinful practice. Nevertheless, her talent was encouraged throughout her time in high school, and thus her lifelong commitment to sculpture blossomed. One of her most notable works is a commission for Harlem Library of a bust of W. E. B. Du Bois. A talented woman indeed.

The oldest of the bunch by far is Mr Johnson, born in 1763, who was known for his self-taught paintings of prominent Maryland residents. Johnson’s life is quite the mystery, due to his initial status as a slave. However, he received his freedom in 1782 and began identifying himself as a portrait painter by 1796. His most notable work in our modern world is his painting called ‘The Westwood Children’, now in the National Gallery of Art, presenting the children with expressionless stares, with the youngest on the verge of a smile. Johnson in many ways paved the way for black artists, not because of his fame as a painter, but because he had the ability to become an artist from his beginnings as a slave.

Born in 1859, Tanner was the first African American painter to gain international acclaim. Tanner spent most of his adult life outside of America, mostly in Paris. During a short return to the US though, his most famous work was created, ‘The Banjo Lesson’. This painting is fabulous because of its seeming simplicity. The painting depicts an elderly black man teaching a young boy to play the banjo. The painting’s simplicity stops there. ‘The Banjo Lesson’ explores many complex themes, such as the stereotype of black people as entertainers. This painting is astonishing, because of its presentation of peaceful human interaction, through its use of muted colours and close proxemics. In a word: beautiful.

Lawrence held a number of job roles within his life, such as an interpreter, educator and storyteller, but we know him best as a painter. Born in 1917, Lawrence was inspired and influenced by the bright colours of Harlem as well as by French art, making his paintings a gorgeous mix of cultures. By the time he was 21, his series of paintings of the Haitian general Toussaint L’Ouverture (known for leading the revolution of the slaves that eventually gained independence) was exhibited at the Baltimore Museum of Art. Given the context in which Lawrence was working in, his work was extremely influential and very shocking to the contemporary audience. Today, he is best known for his massive 60-piece painting collection called ‘The Migration Series’ through which he depicted the turmoil and moments of violence during the Great Migration.

Contemporary black artists, working today, have continued to use their art to expose racist stereotypes, explore their identity and reposition Black bodies within fine art. They have also pushed the boundaries of abstraction, working across media, from music to collage and film.

Born in 1969, Walker is an American contemporary artist who dabbles in anything from painting to film-making. Walker is best known for her silhouettes, made from black paper. For example, her 2004 work Grub for Sharks: A Concession to the Negro Populace, currently in a collection at the Tate. When she was 28, Walker was one of the youngest people to receive a MacArthur Fellowship. And if that’s isn’t enough to impress you, in 2007 Walker was listed among Time Magazine’s 100 Most Influential People in the World, Artists and Entertainers. One can only wish for such fame at such a young age.

For the most part, Wiley, born in 1977, is known as an America portrait painter. His painting style is described as highly naturalistic, and his works revolve around the painting of black people, such as his commission in 2017 to paint Barack Obama’s portrait for the Smithsonian. A great honour indeed! Within his paintings, Wiley champions black people, using historical inspiration to create something powerful for black communities. For example, Wiley’s interpretation of Judith and Holofernes, a Biblical story, shows black women holding the heads of white women, encircled in bright and vibrant colours.

Originally from Jamaica, now living in Birmingham, Burke has been described as “the Godfather of Black British Photography”. Burke has been involved in a large number of solo exhibitions, with his first exhibition being in 1979, and his most recent in 2015. His first most notable exhibition was held in Ikon Gallery Birmingham in 1993 and was called, ‘Handsworth from the Inside’. Talk about a booming career! On top of this, Burke has published a number of works on photography, art and cinema, for example his 2015 book ‘At Home with Vanley Burke’. It is undeniable that his career has been a raging success. From humble beginnings, this black artist is renowned in the world of photography, and rightfully so.

According to the Tate, Mosquito’s work is “committed to exploring the open-ended potential of language”. This is because Mosquito’s are takes the forms of performance, video, music and poetry. It is important to remember that art is not just physical constructions, such as painting or sculpture, and that in our modern world, art can mean so much more. And Nastio Mosquito is the perfect example of this! Born in 1981, Masquito has had a very successful career, running exhibitions and projects in Italy, America and the UK between 2016 and his most recent exhibition in February 2020 at the Tate. His work asks questions and attempts to make you think. Its abstract quality is what makes it unique and the epitome of modernity. Don’t fancy staring at some paintings? Well, Mosquito’s art is perfect for you.

Known professionally as just Rozeal, her most notable work is definitely ‘The Blackface Paintings’. This series of paintings perfectly presents her style of art, with her inspirations coming from ukiyo-e printmaking and hip-hop. Therefore, her paintings are vibrant and very fun to look at! Rozeal has been featured in a number of solo exhibitions between 2004-2014, and her work is held in may permanent collections across America. For example, in the National Gallery of Art where her piece ‘afro-died, T.’ is on view. So, if you like hip-hop and artwork inspired by experience in DJing, then Rozeal is definitely worth checking out.

A bit closer to home, this Mancunian won the Turner Prize in 1998 for his painting, which frequently incorporates elephant dung! Ofili’s work has been described as ‘punk art’, and is heavily influenced by artists such as Georg Baselitz and Philip Guston. In 1997, Ofili was established through exhibitions by Charles Saatchi, and became recognised as one of the few British artists of African/Caribbean descent to break through as a member of the Young British Artists group. And his success did not stop there. In 2017, Ofili was anointed CBE for his services to art, and in 2019, Powerlist ranked him as one of the 100 most influential Black Britons.

Ofili painted ‘No Woman, No Cry’ while living in London. Taking the title from Bob Marley’s infamous reggae song, it shows a crying woman. If you look closely at the inscription, you can see she is identified as Baroness Lawrence of Clarendon. She is the mother of Stephen Lawrence, the teenage boy murdered in an unprovoked racist attack in 1993. Inside her tears are tiny photographs of her son, Stephen.

This blog post was written by Elle Anderton. Elle is a Classics and Art History student at Durham University, with special interest in art from the Classical to Romantic period. You can find her blogging at Ellesthetics.

A fundraiser has been set up on GoFundMe for Black Lives Matter UK (BLMUK), a coalition of black activists and organisers from around the UK. The fundraiser is asking for donations in order to “support UKBLM’s work with black communities in the UK”.

Fri Aug 7 , 2020
Once again, Banksy has stepped up, showing support for the Black Lives Matter movement, following the death of George Floyd in America. Banksy is as […] 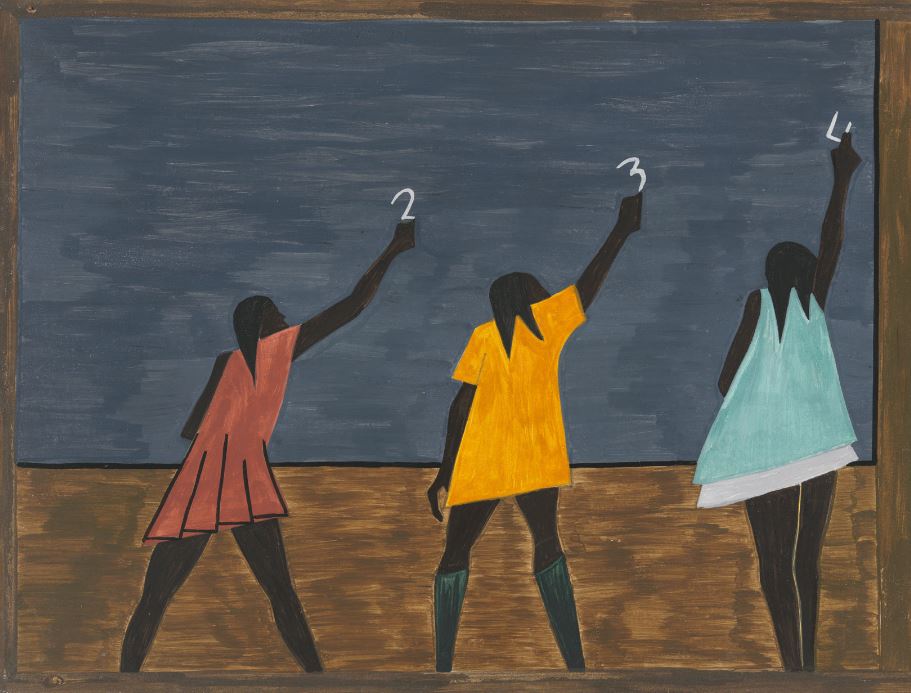