It’s never been easier to take a self-portrait. Instagram is full of them. But why are we all so obsessed with taking selfies? Art History might just have the answer (and be to blame). That’s because artists have been making selfies for a very long time. The self-portrait is one of the most popular genres of art: from Van Gogh to Frida Kahlo, some of the most famous artists have used it to tell stories about their identity. In selfies we share who we are, or how we want to be seen, with the world. From the clothes we are wearing to the holiday destination we proudly pose in, they allow us to construct an identity. So, let’s take a look at some of the most famous artists expressing identity through art.

Take note: they’re much better than we are at selfies.

Who took the first selfie?

German artist Albrecht Durer was arguably the first master of the self-portrait. Like any good millennial, he became selfie-obsessed aged just 13. His earliest self-portrait was drawn in silverpoint in 1484. From then on, he continually came back to the image of himself, in which he constructed his identity as an artist. In his paintings you can see his self-identification as a Renaissance artist, rather than a Medieval craftsman. Dürer painted himself as a gentleman; just look at that cap, cape and silk shirt. And that carefully curled hair – that’s some serious hairspray. You can almost smell the Venetian perfume dripping off him.

In contrast to Durer, Rembrandt’s portraits show an artist more intent on using the self-portrait to express a more realistic version of himself. He created nearly 100 self-portraits during his lifetime, including approximately 50 paintings, 32 etchings and 7 drawings over 40 years. His paintings show self-portraits created with an unflinching scrutiny: he looked closely and recorded the imperfections. But its the texture, uneven skin tone and honesty, which make him a master of the self-portait as true expression.

Frida Kahlo is Queen of the self-portrait. She is one of many artists who have used self-portraits to emphasise the fluidity of gender, refusing to adhere to statically masculine or feminine characteristics.

“I paint self portraits because I am the person that I know best. I paint my own reality” – Frida Kahlo.

Today, Frida Kahlo has become an icon of feminism, freedom and gender fluidity. Her progressive attitude towards gender is apparent throughout her self-portraits, and she is instantly recognisable for her monobrow, strong features and slight moustache. She created a representation of Mexicana identity that actively challenged the expectations and preconceptions traditionally placed on Mexican women. She had no interest in conforming to social norms of gender.

Kahlo painted ‘Self-Portrait with Cropped Hair’ in the wake of a particularly tumultuous time, just months after she divorced her famous husband, Mexican Muralist painter Diego Rivera. He had always admired her long, dark hair, which, as she indicates in the tresses littering the painting, she had cut off after their split. She also shows herself in an oversized suit resembling the ones that Rivera wore. Through such emotionally and symbolically charged details, Kahlo expresses her feelings about her relationship with Rivera while also asserting her sense of self as an independent artist.

Much like Frida Kahlo, Cindy Sherman has used the self-portrait to explore identity as gendered. During the 1970s, the American photographer began to take selfies. She masqueraded as a myriad of characters, inventing personas and tableaus. Her photographs examine, and show up, just how easily we can construct identities. Many of her images explores social role-playing and sexual stereotypes.

In ‘Untitled Film Still #3’ (1977) she plays at the stereotypical representation of a housewife from the late 1950s or early 1960s. In the traditionally domestic scene, she – seemingly a suburban housewife – stands at her kitchen sink.

Magritte is a man who shied away from the self-portrait. We all know one friend like that: they ruin every group photo. ‘The Son of Man’ is one of Magritte’s most famous, and most puzzling, paintings. He portrays himself in a bowler hat, but hidden by an apple. The artwork started out as a self-portrait. However, letters written by Magritte indicate that he found it difficult to paint himself and used an apple to hide his face. In true Surrealist fashion, the picture also plays with perception and reality, the visible and invisible. As Magritte said: “everything we see hides another thing, we always want to see what is hidden by what we see”.

Self-portraiture isn’t going anywhere. Despite the camera-shot selfie, it continues to dominate contemporary art, from photography to painting. Never have we been so concerned with constructing our identity, free from stereotypes, and art echoes that.

‘Home-Made Sushi’ belongs to Pixy Liao’s ‘Experimental Relationship’ series of photographs. She features her Japanese boyfriend Moro (5 years younger than her). She has used this series to explore a relationship dynamic which contrasts to traditional one expected by Chinese heritage and upbringing. She assumes the dominant and authoritative role. She often strips Moro of all clothing and positions him to convey his diminished authority. In this work Moro is nude, laying passively on strategically folded bed sheets made to look like seaweed. He couldn’t be more powerless, stretched across the frame, acting as a piece of raw fish to be consumed by the female photographer on the other side of the lens.

Another contemporary artist addressing identity through the self-portrait is Paul Sepuya. The Los Angeles-based photographer shoots queer men—himself included— posing alone or together, naked or clothed, in a studio setting. He deliberately deconstructs archetypal subjects like the male nude and self-portrait. Manipulating perspective using mirrors, drapery, and collage, he complicates the relationship between the viewer and the subject, often himself. He seems to be saying that you can’t simply someone into one way of looking at them.

“It’s that reflective thing when you just are unguarded, caught in the mirror. I think being brought up in the theatre it was all so much to do with mask, with putting on a face. In a way, I’m trying to do the opposite of that so you get underneath the mask, and the figures actually stare at you… It’s not really myself… it’s more a psychological state of me… different aspects of me but also of other women. I start off with myself; loosely there is a sort of semblance to me… you’re looking at the paint becoming… skin or flesh” – Shani Rhys James.

It turns out that art history really is to blame for our selfie obsession. But it isn’t necessarily a bad thing. 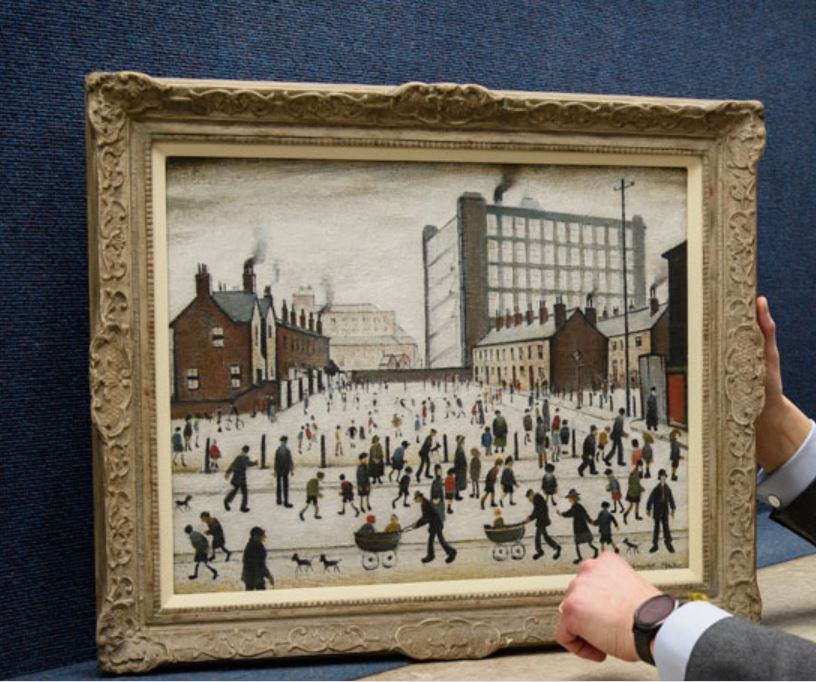