“Queer” is a deliberately difficult term to define, as the very meaning of it is to blur categories and challenge norms. Broadly speaking, the label encompasses sexual and gender minorities; it’s both an orientation and a community for those on the LGBTQIA+ spectrum. And in today’s society – where we seem obsessed with classification and quantifiable stats – queerness is more urgent than ever. These 10 queer contemporary artists all engage with themes of desire and fantasy in various ways to seduce and subvert society’s straight-laced expectations.

First on the list of queer contemporary artists is London-based Victoria Sin, who works with performance, moving, poetry and print. Desire, fantasy and the body all lie at the core of Sin’s practice that often take personal experiences as a starting point. More specifically they are interested in the affects on the Queer body within our patriarchal and heteronormative society. Drag has become an important tool for Sin to investigate these issues. Yet Sin does not strive to ridicule stereotypical signs of femininity, but rather they share Judith Butler’s understanding of drag; Butler argues that “the parody is of  the very notion of an original”. Hence, it is the essentialist categories of sex and gender that Sin’s work criticises. One of their most remarkable performances is The sky as an image, the image as a net 2018 at the The Serpentine Pavilion in London, available on YouTube.

Sadie Lee is a British figurative painter renowned for her powerful portraits of butch dykes and burlesque artists. Born and raised in Yorkshire she moved to London in the late 1980s where she still lives and works today. Drawing inspiration from various sources raging from film director David Lynch to fashion designer Coco Chanel, her suggestive paintings invite the viewer into a universe of sleaze, glamour and gender-bending. In 1992 she gained widespread recognition when her double portrait ‘Erect’, of her and her partner, was used to promote the prestigious BP Portrait Award – it was seen widely on posters and publicity campaigns across London. This was in the era of Section 28 in Britain when queer visibility was legally sanctioned against; confident and stern Lee and her partner confronts the viewer with a look that refuses to budge.

Third up is South-Korean artist Dew Kim, who engages with performance, moving image, sculpture and installations. Raised in a Christian family, growing up he used to imagine sexual fantasies using Biblical figures and stories. Fantasy, sex and religion remain key themes in Kim’s work. After having spent time in the US and London, where he gained an MA from the Royal College of Art, he now lives and works in Seoul. Technology and science, in particular their effect on humans and the planet, interest him. All these themes submerge in the exhibition Succulent Humans (2018); Kim imagines an apocalyptic space in which we have depleted the earth’s resources and humans have turned sterile. Through sculpture, videos and installations he explores the possibilities of a post-human and post-gender society.

Evan Ifekoya is a London-based interdisciplinary artist working with sound, text, moving image and installations. Working with appropriated material from both historical archives and popular culture Ifekoya re-invents or “queers” our collective imagination. As in the video work The Gender Song (2014) they play with the aesthetics of MTV music videos and the common theme of “boy meets girl”; dancing in various outfits to a catchy rhythm the work is hilarious, thought provoking and subversive. For Ifekoya mobilises humour and playfulness not only to render theoretical issues more accessible, for also a strategy to question the idea “fine art” ought to be serious and difficult. Currently Ifekoya is working on the collaborative project Bliss.

Sunil Gupta discovered photography at a young age and has documented queer lives since the 1970s. Born in New Delhi, he moved to Montreal as a teenager and then to New York. In 1976 he produced his first major work entitled Cristopher Street in which he collated images from the gay scene in New York. Charged with desire and joy, the photographs of men walking confidently down the streets of New York posses a wonderfully optimistic energy. Gupta cruised the streets with his camera. Since this period his work has taken various turns, often influenced by his life situation.

In the early 1980s Gupta moved to London to study at the Royal College of Art and during the violent homophobia spurred by the AIDS crisis he shot queer family constellations; in the mid-90s Gupta himself was diagnosed with HIV and began documenting the treatment in a series of self-portraits. His first retrospective From Here to Eternity is currently on show at the Photographer’s Gallery in London.

Canadian-born Cassils is a transgender artist whose work explores erupts from their own body, literally. Through rigid exercise, diet and hormone injection Cassils transforms their body and documents; it is body-building at its core. Cuts: A Traditional Sculpture (2011-2013) is a series of photographs of the artist gaining 23 pounds of muscle over 23 weeks, thus reversing feminist artist Eleanor Antin’s work from 1972 in which she documented her weight loss. In a live performance conducted in 2018, entitled Becoming and Image, Cassils attacks of pile clay in total darkness whilst being shot by a single camera. The work demonstrates the performative nature of gender, and that even something as materialist as muscle mass is mendable and in constant flux. The way society exerts power on our bodies through discipline is both demonstrated and challenged by Cassils’ body sculpting.

“Badass butch” Catherine Opie can be described as the grand dame of contemporary American photography. She studied photography at the California Institute of Arts and her earliest work, such as the series Being and Having (1991) consists of impassioned depictions of Los Angeles’s leather dyke scene. If her subject choices can be perceived as provocative, her style is quite the opposite. As in her most controversial, but now iconic, piece Self Portrait/Pervert (1994). More than anything this piece was a critique against the LGBT+ movement’s increased focus on assimilation and “normalcy” that deliberately excluded the leather community. As a response Opie etched her chest with the word “pervert”. Dressed in only a pair of leather trousers, with a matching choker and mask, she depicts herself sitting down in front of a luscious brocade drapery. Formally however it is reminiscent of a Renaissance portrait, particularly in how sensuously all the different textures of the materials are conveyed.

Famously described as a “drag terrorist” Vaginal Davis’s artistic practice refuses categorisation. Naming herself after activist Angela Davis her mere presence disrupts the orderly binaries of our culture; she is of German, Jewish, Mexican and French-Creole heritage, and is of intersex identity. During the 1980s Davis became a pivotal figure in the queercore movement, a punk subculture interested in transgression and subversion. On practically non-existent budgets she produced zines, performances and videos; she painted with make-up. Although her work treats difficult themes such as class, race and gender it is simultaneously hilarious, and often very sexy. One of her most notable works is the video The White to be Angry (1999)which examines desire and queerness in white supremacy; the jokes are as dark as the satire is sharp. In 2005 Davis relocated from Los Angeles to Berlin where she lives and works today.

Historically queer desire has had to be cunningly concealed in visual art, only hinted at by specific signs. Salman Toor’s paintings are characterised by curvaceous lines and sumptuously worked surfaces. Originally from Pakistan, he now lives and works in New York. One of Toor’s greatest strengths is to narrate stories with the brush, and often he re-interprets famous European paintings. The Bar on the East 13th (2019) for instance re-imagines Manet’s Un bar aux Folies Bergère (1882).Toor transport the well-known composition to contemporary New York; a young and handsome androgynous figure, with a neat moustache and long braids, gaze tentatively on the client, hinted in the mirror behind them. Quite literally Toor brings brown queer bodies back into the history of art. Salman Toor: How Will I Know is currently on at the Whitney in New York.

The final artist on our list is Jes Fan, working with sculpture and installations. Born in Canada, then raised in Hong Kong, they now live and work in New York. Fan strives to corrode one of the most assumed binaries in our society, that of art and science. More specifically their practise dives into the complexities of biology and transgender identity, both heated topics that tend to be shied away from. Transitioning themselves, the process of change and the biotechnical aspects of gender relates to Fan on a deeply personal level. Hormones and bodily fluids both feature frequently in their work.  Mother is a Woman (2018) for instance consists of a test-tube of face cream with oestrogen derived from their mother’s urine. Tactile, suggestive and uncanny Fan’s work entrances the onlooker as much as it makes them squirm.

This blog post was written by Victor Schagerlund. Victor is a writer and art historian interested in questions of gender and sexuality, from the nineteenth century to today. Instagram: @vicsch.taq 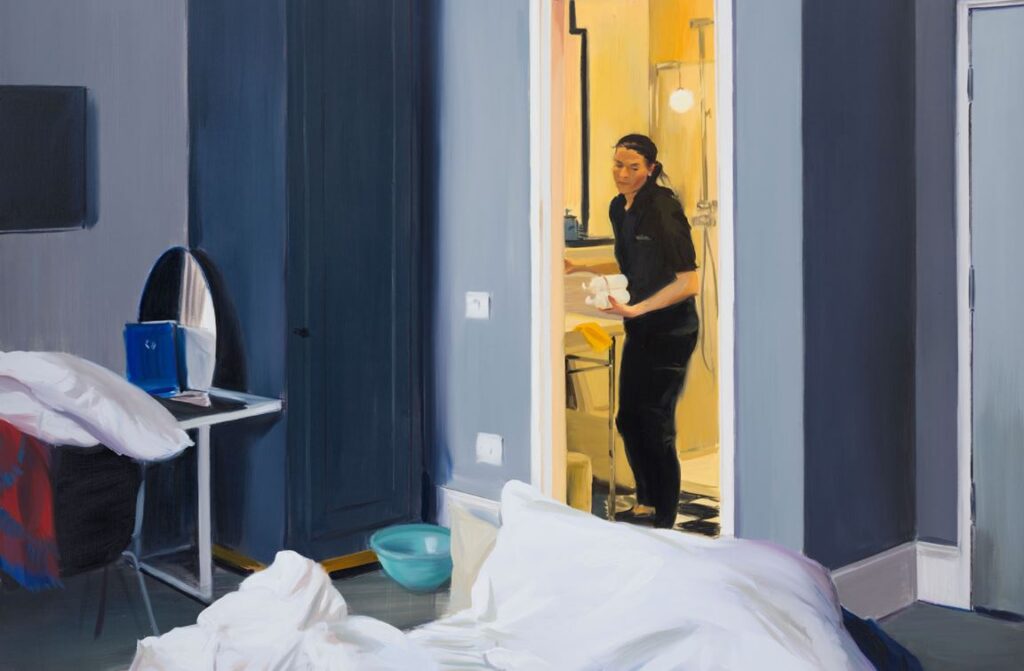